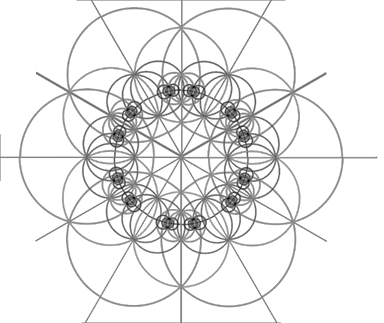 Circle Limit for the Casual Enthusiast

NOTE: Due to blog formatting issues, the following article is best viewed as a PDF, click here.

(Circle Limit I by M.C. Escher)

The aim of this article is to simplify the geometric (straight edge and compass) construction of tilings similar to the one above. Escher’s tiling was a result of his correspondence with the mathematician H.S.M. Coxeter who had shared the following tiling :

Considering the fact that Coxeter did not produce this manually himself, it naturally raises the question about who made the above figure. Though that is not the line of enquiry the construction stated in this article is aided by in any way, Escher himself constructed the Circle Limit which to some extent might have followed Coxeter’s exact principles but it is also believed that beyond a certain number of tilings, the tiling by Escher is a rigor through craft than through math. Hence, Escher’s work necessarily shows that a Euclidean construction is possible to represent the tiling but it is not sufficient in showing that it is done in a mathematically accurate way. This article too would be focusing upon the geometric construction of the Circle Limit; except that the method shown here is scalable, procedural and can be iterated until one reaches the physical limitations of the tools and media in use. While doing so, there shall be casual allusions to hyperbolic spaces and constructions to help one gain an intuitive understanding of the math behind crafting the circle limit.

NOTE: It is recommended that one should have elementary knowledge of geometric constructions and familiarity with the concept of a straight edge and compass before continuing to read. There are no proofs involved and some statements are stated with the view to create the base for the main construction in an intuitive way and may not be rigorously explained.

1) Tiling and understanding the Circle Limit:

Tiling was of particular interest to Escher and above one can observe planar 2 dimensional tiling done by him. A plane can be tiled through the repetition of a base shape or permutation of a handful shapes that can be detailed artistically to appear more interesting and relatable. But this is trivial to visually digest as equal sizes appear equal in such planar setting.

Observing the Hyperbolic mosaic that Escher referred, the central angle is divided into 6 parts (considering one black and white pair to be a whole triangle) giving that one angle of each is 60 degrees. By symmetry, the triangles (formed by black and white pair) are all equilateral. Since it is a tiling of the disc, one can notice that the disc is tiled by hyperbolic equilateral triangles.

Understanding certain geometric properties of the hyperbolic disc and also some constructions would help in the final construction.

2) Gaining intuition for the Hyperbolic disc:

To understand the construction in the context of inversion:

Let us assume that P is given and P’ is to be located.

The steps would be:

This is an important relation between the circle’s radius and the locations of the point and its inversion. It implies that the closer a point is in the interior of a circle to its centre, its inversion would be located farther in the exterior. As length of OP’ would approach zero, point P would be located almost infinitely away from O. The inversion of O would be located at infinity. Scaling up this inference, it can be considered that every point starting from being right on the circumference till infinity has an inversion within this circle. So every point and hence every element outside of it can be mapped onto its interior. Since the disc can contain all points and elements within it, this could be an independent universe of the disc where all lines are circles and arcs. Such a disc is called a Hyperbolic disc model (or Poincare’ disc model) that is representative of hyperbolic 2D geometry.

As of now, without defining the polar, assume it to be a line perpendicular to the line through the pole and its inversion.

b) Inversions of other geometric elements in a circle:

Similar to Escher’s self-portrait as seen above, inversions of other geometric elements in a circle result in their warped counterparts.

Observe the central hexagon and notice that the pair of black and white triangles that form a triangle form an isosceles hyperbolic triangle which requires to be tiled across the hyperbolic disc.

An individual triangle (black or white) here has the angles 30, 45, 90 degrees (In hyperbolic triangles, the angles add up to less than 180 degrees). These angles are Pi/6, Pi/4 and Pi/2 radians respectively. Hence such a tiling might also be referred to as a 642 tiling of the hyperbolic disc. The construction here can be performed for tilings with triangles having an angle of Pi/n where n >= 5 and the other two angles are fixed Pi/4 and Pi/2. These triangles tile the whole disc meaning that every hyperbolic triangle is of the same size in the above hyperbolic disc.

In our case the angles involved can be simply constructed with straight edge and compass. Trisecting a right angle would produce the Pi/6 measure which can be copied as and when required.

The tiles can be transformed into motifs as done by Escher and that may not require very complex tiling but just an intuition as to how the tiles are warping as they approach the circumference.

The above steps are completely possible while using a straight edge and a compass. But it can be made efficient by using softwares like GeoGebra, Geometer’s Sketchpad or even any software with procedural capabilities (Houdini, Unity, etc). The approach while using software though can have two choices: first is to replicate the above Euclidean procedure and the second being to actually create hyperbolic lines and circles (defining a hyperbolic system in the program) to plot the triangles and procedurally repeat them to tile the disc with higher accuracy.